These three tiny islands off the north west coast of Lombok have become really popular with travellers and tourists in recent times but I bet there are a bunch of you asking, where on earth is Lombok? I had no idea either! (check out the map)

The ‘Gilis’ are made up of Gili Trawangan, Gili Air and Gili Meno and decrease in size in that order. You can reach the islands by boat, whether it be the slow public ferry or the fast speed boat, from various points in Bali and Lombok as well as from other islands. We travelled from Nusa Lembongan (click here for our post on Lembongan).  The water does get quite choppy between Bali and Lombok so we were pleased to have opted for the fast boat rather than the public ferry, which would have been about a 5 hour journey rather than 2 hours.

Hailed as the party island of the three, we decided to hit this island first. High season doesn’t kick in until mid June and we were told by locals that July and August are pumping. We visited in May, which is the shoulder season, so it was a little quieter.

There is a main road which runs along the length of the east coast of the island which is lined with restaurants, bars, diving schools and accommodation. If you don’t fancy sleeping right in the middle of everything, there is plenty of accommodation dotted on quieter roads which lead off the main road and further around the island too.

We spent 4 nights at Gili Palms Resort which is on a quieter side street off the main road. It is about a 15 minute walk from the harbour. This resort consists of 14 ground floor rooms in a horse shoe shape around a long swimming pool. Our room had a tv, air con, wifi,  mini bar and a partially covered outdoor bathroom with hot water. The room was pretty spacious and it was really quiet.

They serve breakfast here but no lunch or dinner. 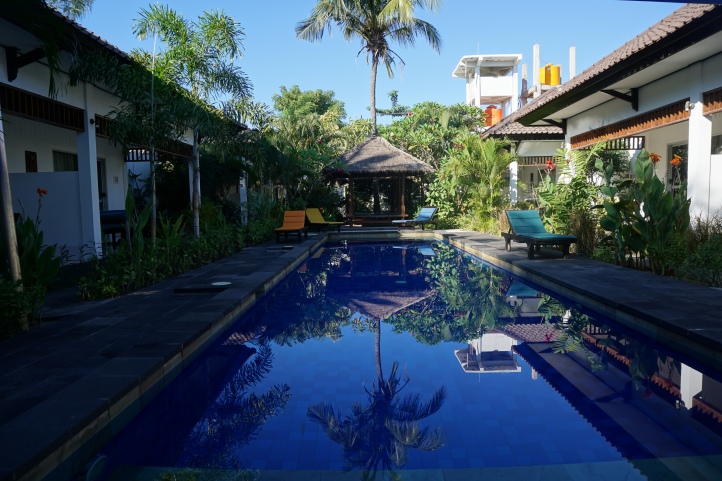 The usual tiny island stuff! We walked around the streets taking photos and videos, hung out on the beach swimming about in crystal clear water, ate dinner at beach side restaurants with tables in the sand, and politely declined the numerous enthusiastic offers for magic mushrooms!

There is a lookout point that you walk up which has two access points. One is next to the stud farm and the other is just a set of steps next to the road. There are no signs but if you grab a map of the island, you will see the lookout point on it. 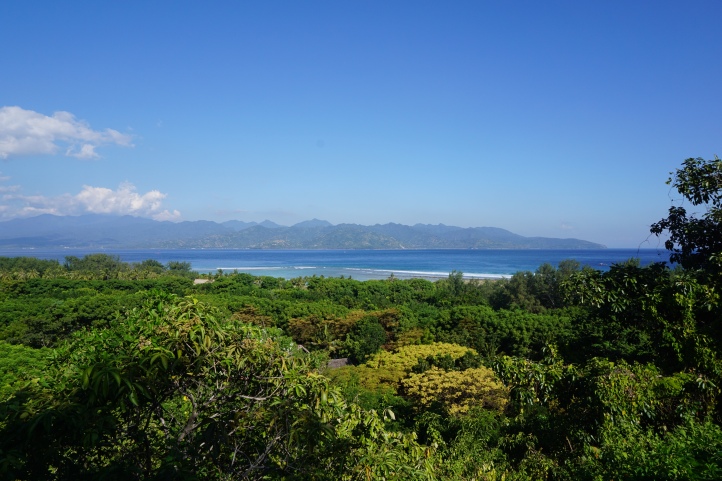 Mainly by walking. It took us about 2 hours to walk around the entire island. You won’t find any cars or petrol mopeds on any of the Gili Islands. You can rent a bicycle to get around (which we did for one day on Gili T) and the taxis are a horse and cart. There are some electric mopeds on the islands but these are not available for visitors to rent. 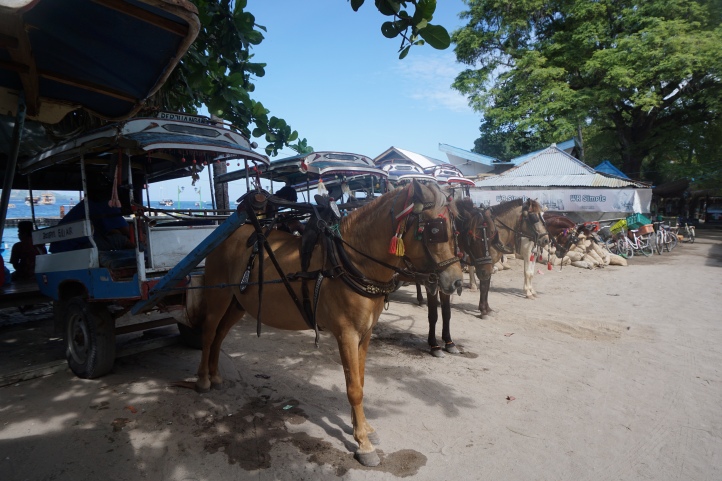 A short boat ride from Gili T is the honeymoon island of Gili Meno. The smallest of the three islands, it is popular with honeymooners and couples looking for a romantic time away due to it being so quiet and the beaches being picture perfect.

We spent 4 nights at Fantastic Cottages which was a 2 minute walk from the harbour. Well technically, it isn’t really a harbour but rather the patch of sand you land on when the boat pulls up on the beach.

They have about 8 or 9 bungalows, two are standard bungalows and the rest superior. We were in a superior bungalow and it was spacious, had air con, fridge, tea and coffee making facilities, wifi, drinking water dispenser and indoor bathroom.

They have a restaurant which serves breakfast, lunch and dinner. In fact, we ate dinner at the restaurant every night.

My favourite part of Fantastic Cottages was the staff. A great bunch made up of a family and some friends, who spoke fantastic english, and loved having a chat with some pretty good banter.

Apart from the usual island activities, there were two particular activities we did which were great.

The first was a snorkelling trip with a couple of the lads from Fantastic Cottages. It was just the two of us on the boat with the lads and we were taken to maybe four different spots around the Gilis where we swam with turtles. Amazing. The trip lasted a couple of hours and we set off a little earlier than all the other snorkelling trips to avoid the crowds. 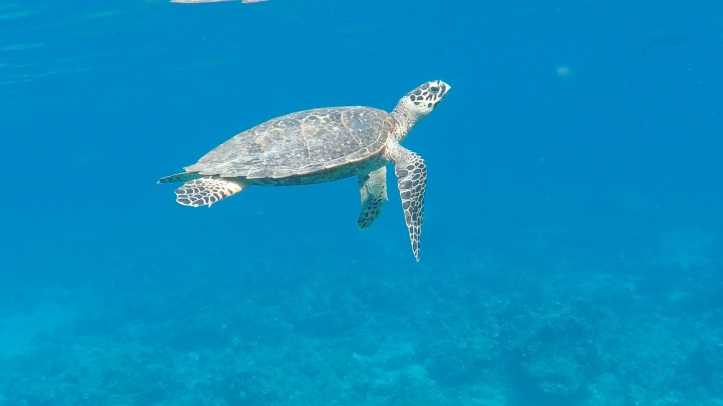 The second activity was a fishing trip with the owner (and his son) of Fantastic Cottages, which Andy did. He enjoyed it so much he went twice. An early start at 6am but the views of the sun coming up were beautiful. Andy caught a large fish on the first trip (trigger fish or tiger fish…not sure, it got a little lost in translation, we think) which was cooked for us for dinner by the kitchen at Fantastic Cottages. Super tasty and large enough for everyone to have a taste.

Feet. You can walk around the island in an hour. You can rent a bicycle and there are also horse and cart taxis too. 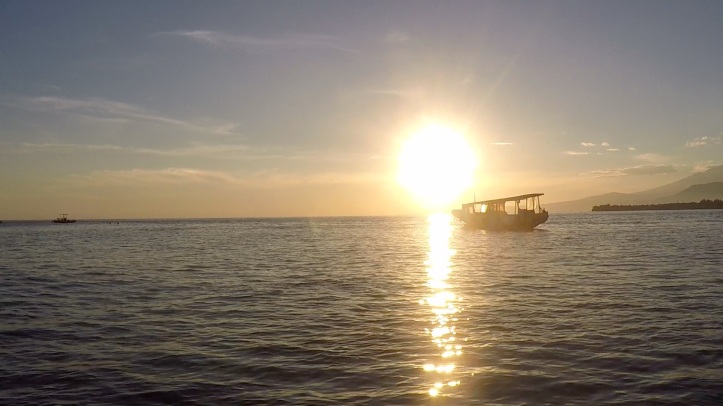 This island was described to us by locals as a mix of Gili T (lots to do, bars, restaurants and a ridiculous amount of diving schools) and Gili Meno (beautiful beaches). Unfortunately, the beaches seem to have lost some of their charm. Maybe partly due to sea erosion, partly due to lots of building on the beaches to accommodate increasing tourism, the beaches that are accessible are narrow with barely enough space to lie down and, sadly, littered.

We stayed 3 nights at Chillhouse Gili Air Bungalows which consisted of two bungalows built about 6 months ago. The bungalows are about a 10 minute walk from the harbour. Each bungalow has air con and an outdoor bathroom with cold water shower. There is a communal kitchenette where you can help yourself to water, tea and coffee. There is also a large fridge which you can use. The kitchenette is mainly used by the two young lads who look after your every need at Chillhouse. If they catch you trying to serve yourself, they hurry over so they can serve you instead. They serve breakfast here but no lunch or dinner. They can also  arrange bike hire, snorkelling trips, and get any information you may need. They were really attentive and nothing was too much trouble for them.

What we did and how we got around

To be honest, not a lot! We walked around the island which took about 1.5 hours taking in the sights. There are a ridiculous number of dive schools here so should that be your thing, then this island would be great for you. We spent a couple of lazy afternoons using complimentary sun loungers and free wifi provided by some bar/restaurants. We had early nights every night here as the bungalows are right next to a mosque and the call to prayer starts at 5am!

Things to bear in mind:

Dogs are not allowed on the Gili Islands. Instead you will find that cats are the kings of the castle, kept company by chickens, cows, goats and lizards. 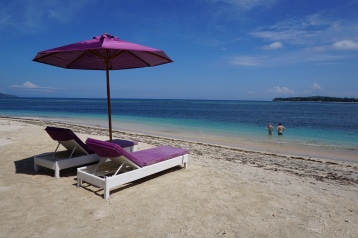 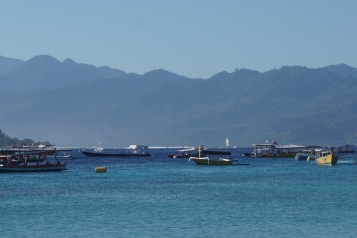 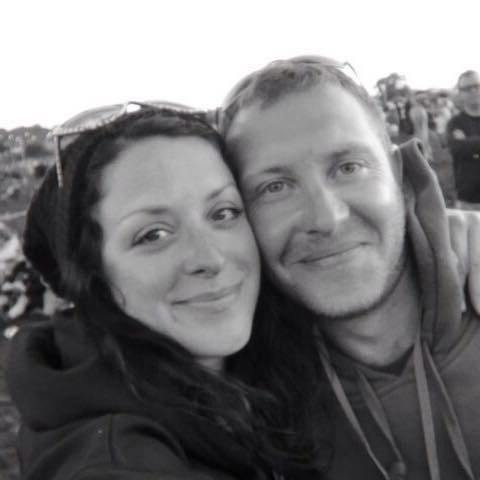