As the road signs reminded us, as we drove this stretch of coastline, this is The Whale Coast. Unfortunately for us, due to the time of year, we were not going to see any whales. However we were already aware of this and instead wanted to view up close some other large sea creatures!

From the disappointing and rather bland town of Mossel Bay we set off in the van towards Cape Agulhas, via the tiny seaside village of Arniston. Arniston is set right on the coast and has a couple of lovely beaches right on it’s doorstep. It had a bit of a ‘retirement home’ feel to it as it was very small and quiet and the majority of the houses look like holiday homes. It was worth stopping and having a walk around for half an hour but we wanted to carry on to L’Agulhas. Here we found a municipal campsite 50m from the sea on the southern most tip of Africa, where the Indian and Atlantic Oceans collide. The small town has a few bars and restaurants, along with more holiday homes. But with a shop and a laundrette it felt like being in a city compared to Arniston! There is a National Park area with a lighthouse down on the rocks and a boardwalk along the coast so that you can take in the views of the most southerly point in Africa. It was nice but I feel that we’re spoilt coming from Jersey as we have Corbiere Lighthouse back home (for anyone reading who’s never heard of it https://www.jersey.com/360/liberate ) and the views from there are a lot nicer!

The following day we drove an hour or so further along the coast to the towns of Gansbaai and Kleinmond. There was only one reason, for us, to be stopping here! After a little research we decided on the company that we’d use and booked ourselves onto the following day’s Shark Cage Diving trip with Great White Shark Tours http://www.sharkcagediving.net

This was an activity that I’d had in mind since we decided to travel in South Africa. I felt that it was one of those things not to be missed and definitely one to tick off the bucket list. Bel however was just trying not to think about it at all!!!

Now those that know me will know that I don’t show a great deal of emotion (unless really drunk!) or get easily excited about things but in this case it definitely had the heart rate beating a little faster!

We arrived at Great White Shark Tours at about 10am and after signing away our rights if we happened to be eaten by a shark we had breakfast and watched the safety video. There were a few nervous murmurs around the room when a few people realised what they’d signed up to!

About 20 – 30 minutes after leaving the harbour we stopped and anchored in ‘Shark Alley’. We’d been advised that it can take time to find the sharks, these are wild animals after all, but within 5 minutes the first Great White was circling the boat. It was a baby at only 2.5m long! The 8 person cage was lowered into the water and fastened to the side of the boat. It was time to get in the water. As you lowered yourself into the cage the initial shock at how cold the water was, even with a wetsuit on, made you forget for a second or two what you were doing and before you know it you’re in the cage in shark infested water. Although visibility in the water was only about 2m and we couldn’t see very clearly, the rush of adrenaline experienced when a large Great White glides past 6 inches from your nose and crashes against the cage is amazing. The views from the boat were probably even better as you could see the sharks approaching in the water before trying to snatch the bait on the surface. Over the course of the 3-4 hours on the boat everyone (about 30) had the chance to enter the cage on two or three occasions. We saw 7 different Great White Sharks, ranging in length from 2.5m to 4m. We returned to the harbour for complimentary food and soft drinks whilst we viewed the video made of the day’s trip.

After returning to the campsite we decided to treat ourselves to braai seared garlic butter steaks washed down with a very big, bold red called Philosopher’s Stone from Camberley Wines in Stellenbosch. It finished off a great day and definately the highlight of my trip so far.

Our next stop along the coast was Hermanus. Friends of ours, Nick and Suzy, had told us how great the town and the area was and how they loved to holiday there. I must say that I can totally agree with them. Hermanus is a great place with a smallish town feel to it but with loads of things to see and do. We stayed at Onrus Caravan Park which was about 9km from Hermanus itself. That was such a shame as we really would have enjoyed staying closer to the town for easy access at night to the bars, restaurants and shops.

We explored the 5 or 6 beaches along the town’s eastern suburbs and decided that our favourite to relax, sunbath and read a book at was Grotto Beach. With toilet and shower facilities as well as a beach bar, cafe and loads of braai sites it would make a great place to spend a day with family and friends. When we’d had enough of relaxing we decided to head along the Hemel en Aarde Valley which stretches for nearly 7km along the R320 and is the Hermanus Wine Route. We stopped at two fantastic wineries La Vierge and Newton Johnson, who both had lovely wines and stunning views across the valley.

With 5 days still to go before we had to return the van to Cape Town we decided to head back to Stellenbosch and Franschhoek for my birthday weekend. We took a detour via Paarl so that we could visit the Spice Route Destination, home of the Spice Route Winery sales and various other artisan producers. We’ve tasted these delicious wines before at Dunells at home in Jersey and thought it would be rude not to stop and see what else they have to offer since we were in the area! That evening we headed back to Mountain Breeze Caravan Park, outside Stellenbosch, so that we could walk to the Root 44 Market in the morning. We spent the day sitting around under the trees drinking cider and wine and tasting various food from around the world from the amazing food stalls. Although there was no live music this time (possibly due to a power cut the previous night) it was still a very enjoyable day.

For the final 3 days we returned to Franschhoek and Bel brought me (and hence us) a days wine tasting on the Franschhoek Wine Tram for my birthday. We chose a different route (they offer five of them) to our previous visit a few weeks ago and this time there were less tourists about and it felt a little quieter. This was fine by us as we found a couple of stunning boutique wineries, in particular La Bourgogne Farm. We sat out in the beautiful garden, had two complimentary glasses of wine and tasted three others whilst also eating some of their amazing olives.

At the end of the day we headed back to the van at Otters Bend Lodge. This was a quirky little place but the only place within walking distance of town where we could park the van and plug into the electricity. It had some small but nice wooden rooms with ensuite bathrooms, a three bed dorm room, a camping area for tents and two or three electricity points for a campervan. There was also a communal area for cooking, eating and relaxing in front of the log fire, however it was a bit dark and dingy (and not as nice as their photos suggest) and we found the whole place would benefit from a little money being spent on it to brighten it up and improve it. The major downside to the place however was that the dorm and all the campers have to share one shower and toilet in an old shed between them. Not very useful when you really need to ‘go’ and someone else is having a shower!

Eventually our 35 nights in Simba The van, exploring the Western Cape were up. We returned the van to Lekker Camper who had been very helpful and friendly throughout, from booking the right van to being on hand to sort out any issues along the way. I wouldn’t hesitate to recommend this small family run business to anyone looking to hire a vehicle for a road trip. 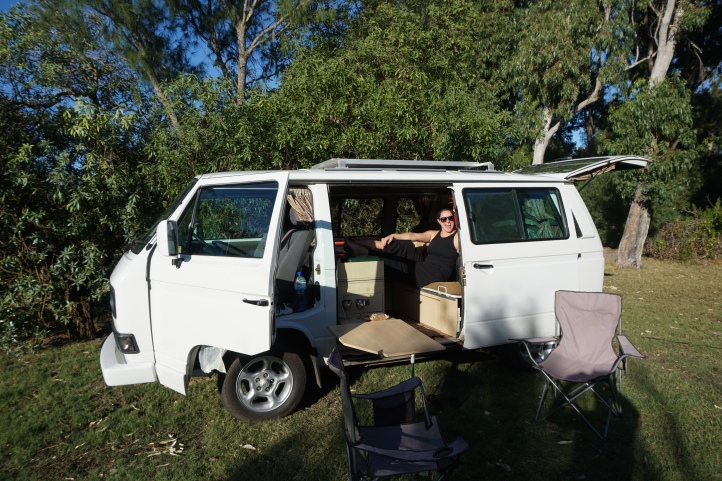